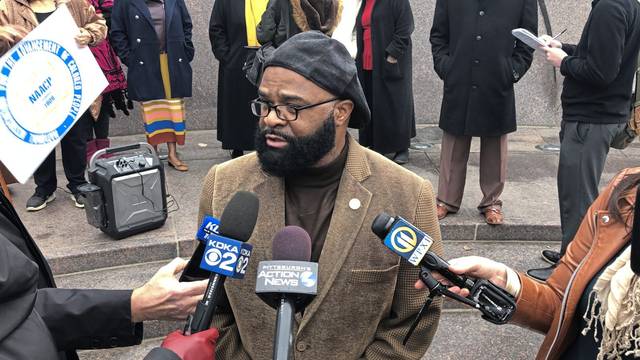 Tranquilli has been on administrative duty since Feb. 6. His alleged comments, including calling a black juror “Aunt Jemima” in a conversation with two attorneys, came to light earlier that week when the attorneys filed a complaint against him.

“He was comfortable with expressing such a racist remark,” said Kenneth Huston, president of the Pennsylvania NAACP. “’Aunt Jemima’ was a term used back in the 1800s. It’s a derogatory term used toward black people. What made him think that we would stand by and be OK with that? We’re not.”

The Jim Crow Museum of Racist Memorabilia, located at Ferris State University in Michigan, details how the Aunt Jemima character plays into anti-black stereotypes and caricatures. She’s a play on the “mammy” caricature, which, according to the museum, helped romanticize “the realities of slave and servant life.”

Huston called for swift judgment from the Judicial Conduct Board, which investigates ethics complaints against judges in the state.

“A judge sits high for a reason,” he said. “He sits high to be fair, to protect all those that come before his courtroom.”

The Judicial Conduct Board, once it reviews a complaint, can dismiss it or move forward with a full investigation. After an investigation, the board can dismiss the complaint or file charges with the Court of Judicial Discipline.

Other community representatives asked how people of color can expect fairness in court if there is an undercurrent of racism.

“How can we walk into court expecting justice when the behavior does not indicate that justice can happen?” asked the Rev. Helen Burton of the First AME Baptist Church in Clairton.

Pastor Maurice Trent of the Lighthouse Cathedral Church called for Tranquilli to lose his position.

“We’re asking … the judicial system to do the right thing and remove this judge from his bench because there’s no place for racism,” he said.

The NAACP joins a growing chorus of critics calling for Tranquilli’s resignation and an investigation.

The Pittsburgh Black Lawyers released a statement signed by nearly two dozen black lawyers about the alleged “heinous” conduct, saying that if proven true, Tranquilli’s behavior demonstrates “a blatant disregard for human decency and integrity in exchange for procuring a conviction at all costs.”

Tranquilli was presiding over the retrial of a man charged with possession with intent to deliver, according to a written complaint from defense attorney Joe Otte that was obtained by the Tribune-Review.

The man was acquitted, which Otte wrote caused the judge to become “visibly upset” and toss the verdict slip back to his clerk.

Otte wrote in the complaint that Tranquilli asked him and the prosecutor, Ted Dutkowski, to have a conversation in chambers after sentencing and after he had a private question-and-answer session with the jury.

He said he knew there would be no conviction the moment the woman, who wore her hair in a wrap throughout the trial, was selected, according to the complaint.

“What was he thinking and why did he target that sister specifically?” Huston asked. “We don’t know and we certainly don’t look for him to tell us why. But we do know this: As a man thinketh, so is he.”