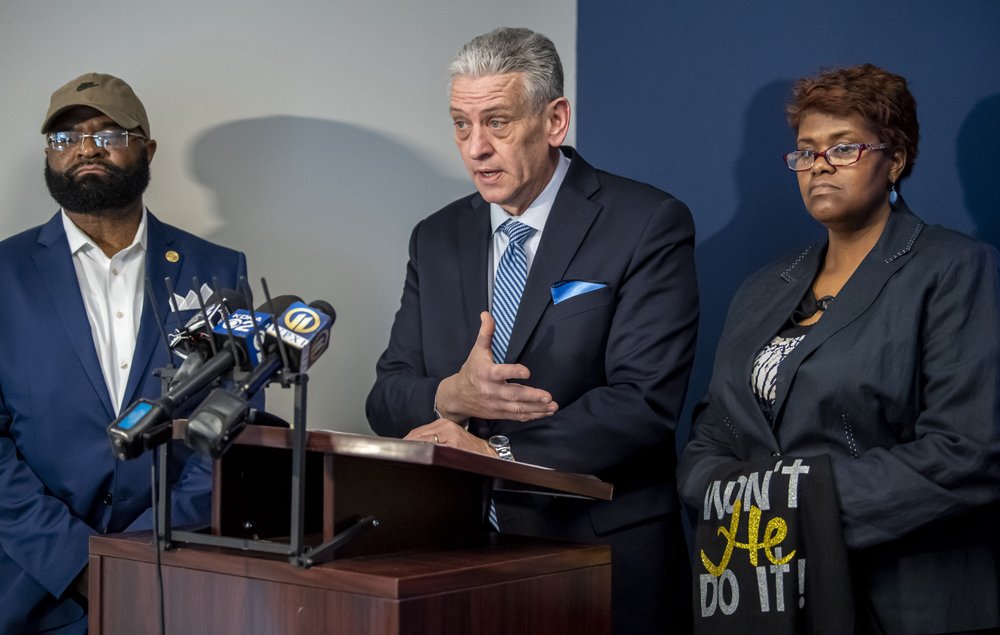 Attorney Joel Sansone, center, announces his filing of a federal lawsuit against the City of Uniontown, Pa., and others on behalf of Antoinette Hodge, right, Wednesday, Jan. 8, 2020, at Sansone’s office in downtown Pittsburgh. Hodge, duly elected as tax collector, alleges the City of Uniontown failed to swear her in as tax collector based on her African-American race. Standing beside Sansone is NAACP Pennsylvania State Conference President Kenneth L. Huston. (Steph Chambers/Pittsburgh Post-Gazette via AP)

The newly elected treasurer of a small city in western Pennsylvania asserted in a lawsuit Wednesday that city officials plotted to block her from taking office because she is black.

Uniontown Treasurer-elect Antoinette Hodge alleged that a city councilman, Martin Gatti, took action to prevent her from being sworn in as scheduled this week and called her a “colored girl” in a discussion with officials at a bonding agency.

Gatti, a defendant in the lawsuit, has adamantly denied using racist language, saying at a council meeting Monday that he had legitimate questions about Hodge’s financial background.

The federal suit, which also names as defendants the city of Uniontown and its clerk, Kimberly Marshall — Gatti’s sister-in-law — seeks to force the city to seat Hodge and to prevent city officials from interfering with her ability to do the job, Hodge’s lawyer, Joel Sansone, said at a news conference Wednesday. The suit also seeks unspecified money damages.

“We will not allow the racist views of any person or persons to stand in the way of the will of the people, not now, not ever,” Sansone said.

Uniontown’s lawyer did not immediately return a phone message Wednesday. A message was also left for the defendants at Uniontown City Hall.

Hodge’s allegations center on the steps that Gatti allegedly took to prevent her from getting bonded. State law requires bonding of some municipal officials as a way to protect taxpayers against financial loss and malfeasance.

Hodge was approved for a bond last week, but Gatti subsequently contacted the bonding agency and canceled it, the lawsuit said. Gatti told officials at the company that “incriminating evidence” had been uncovered by Hodge’s background check, the suit said.

Sansone confronted Gatti with that accusation at the council meeting Monday night, saying: “What I’ve got to ask you, sir, is do you have any idea what century you’re living in?” according to the Herald-Standard newspaper. “Do you understand that calling a black woman a ‘colored girl’ is racist?”

Gatti, a Democrat like Hodge, vehemently denied it and said he planned to sue Sansone for defamation.

“I’ve never used that phrase in my life,” he told Sansone.

Gatti, the city’s finance director, acknowledged he called the bonding agency about Hodge, asserting that she had financial problems and that he was trying to protect city finances.

Sansone said Wednesday that Hodge, a Uniontown native, had no problem getting bonded in the past. He said that her identity was stolen nearly two decades ago, damaging her credit, but that nothing in her background would have prevented her from obtaining a bond. In fact, the Uniontown bond was approved Tuesday, he said.

Kenneth Huston, president of the Pennsylvania NAACP, joined Hodge and her attorney at the news conference and said Hodge had been subjected to “blatant racism.”

“It is absolutely appalling that she had to experience what she experienced, being a duly elected individual in in her hometown,” he said.

Hodge said she was “shocked, at first, because I ever expected anything like this would happen.” She said her shock turned to disgust.

“I just want folks to understand that it doesn’t matter, age, color, political party, we are supposed to stand united as one body to do what’s right for our city,” she said.

Hodge beat an incumbent in the Democratic primary and ran unopposed in the November general election.